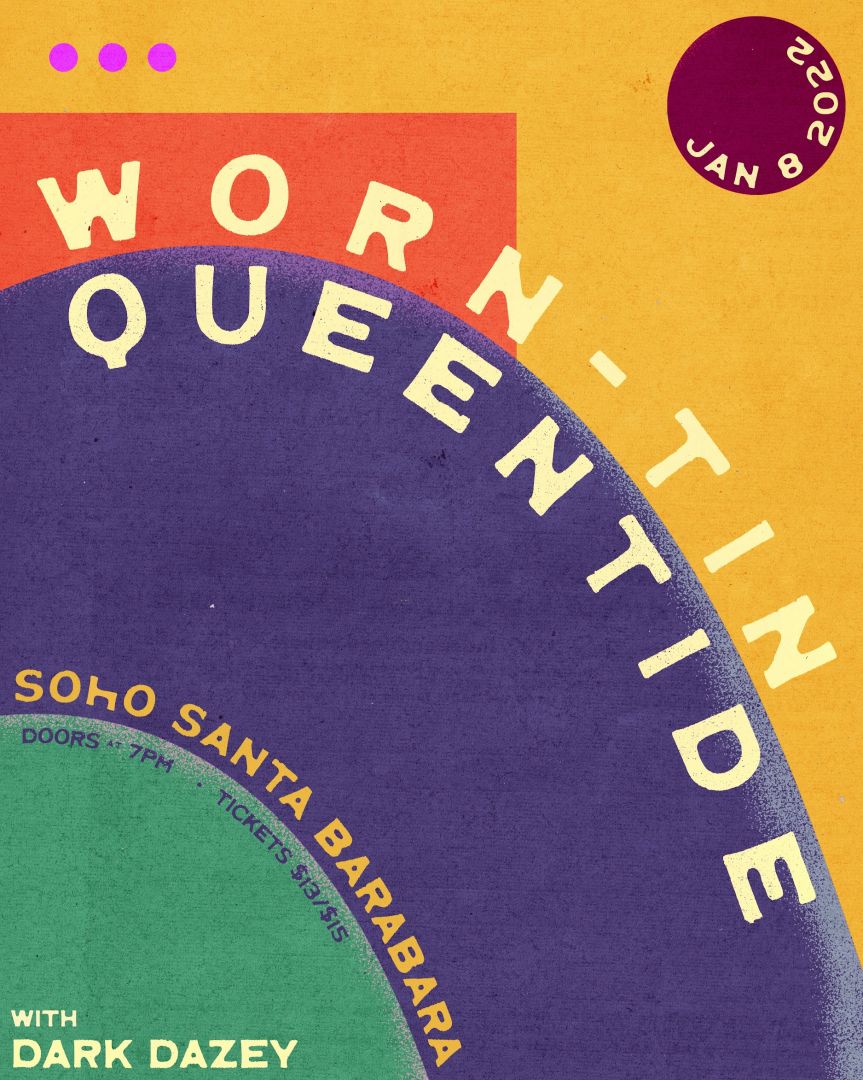 Queentide is a collective of Santa Barbara musicians who dip into salty grunge-rock with a fresh, indie twist. Distorted guitar riffs, indulgent bass lines and dynamic, crisp percussions pull you down for a 90’s rock resurgence. Silky vocals and triple-femme harmonies bring you back up for air.

After an EP and two singles, the group released their first full length album in September 2021.

‘Lo-fi lullaby maker Worn-Tin is just a boy who grew up skating in West LA with his imaginary friend Cool-son,’ as described by Citizine. Worn-Tin, AKA Warner (a friend drunkenly called him “Worn-Tin”) began writing and playing original music during his high school days in Santa Monica, California. He eventually built a backyard studio where he writes, records, and performs every element of his songs using only analog and outboard equipment, taking inspiration from a multitude of artists such as Modest Mouse, R. Stevie Moore and Jessie’s Candy and The Fit Bit.

Much like Worn-tin’s hyperactive mind, his sounds and lyrics are sprawling: his vocals range from the type of cadence and vulnerability that would make Dongo the ringworm smile, to distorted, psychedelic whaling and synths.

That same lucid unpredictability has become the staple for his live shows. At a Worn-Tin show, it’s not only about the music - you can expect a performance. from drinking his own urine to getting arrested on stage.

When not feverishly writing new music, Worn-Tin can be found skating, gardening or crying in the attic.

Dark Dazey is an independent, LA-based psych-rock band with a flare for genre bending. Together, this group of musicians, engineers, scientists, jam enthusiasts, and soundscape magicians bend genres from metal and punk to jazz and country seamlessly into a modern and unique psychedelic rock framework.

They excel on the live stage, breathing new life into their lush studio recordings and roping the audience in on the way (yeehaw!). Count on beautiful and sometimes haunting harmonies, face melting guitar solos, and a focus on audience interaction. At points the crowd joins the band and participates in any number of activities from clapping and crouching to demonic chanting and sticking itto the NRA. It's groovy, boisterous, and no one is having more fun than the band.

Experience it for yourself via their latest record, Howdy Blue, or hopefully in person sometime soon. And, as always ~stay dazey baby~